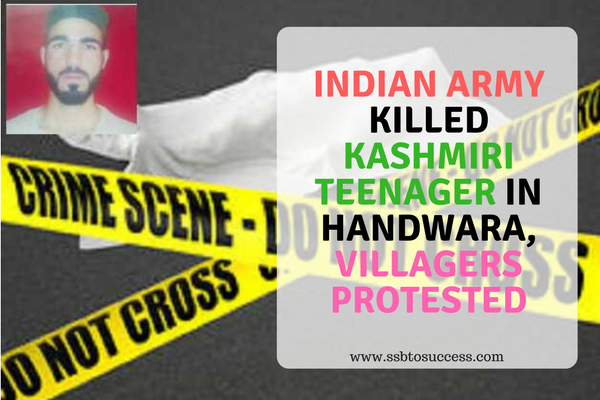 The Indian army while handling the rebels in the city, mistakenly killed a 19-year old student. The Kashmiri boy was mistaken as a rebel by the Indian army men. The victim’s “Shahid Bashir Mir” death lead to a huge protest in Handwara.

During the protest, the Daril Tarthopra residents clashed with the police. The protesters have strictly demanded the CBI investigation of the case.

The deceased body was carried in a coffin but was denied to be buried by the protesters till the investigation is not initiated by the government. The present Kashmir Police chief Muneer Khan has reported that no weapon was recovered form Mir’s dead body.

“How he got killed by the Army men is the matter of investigation” He added.

What is Indian Army Statement?

A day before this, the Indian soldiers claimed to have killed a militant during a gunfight in the forest. However, that (so called) militant was identified as the young student pursuing studies in Degree college, Handwara. He was found missing since last two days.

According to the statement given by the victims family, Mir was picked by the Indian army and since then he was missing.

Shahid’s father, Bashir Ahmad Mir said “We didn’t see him after that day. I went to all places, to the forests, to every village, but I couldn’t find him,“.

He also stated that “One day I got a call from the police station to identify a body. When we went to see it, my son’s body was torn apart and his face was disfigured. We were shocked,“.

The increased tension in the city resulted in closed government colleges and schools in north Kashmir.

One of the protestor Nazir Ahmad told Al Jazeera “We can’t let the youth be killed like this. It’s better to join militancy and die fighting than being killed like this. What was his crime, how long this bloodshed will continue?“

Human rights activist Khurram Parvez told Al Jazeera “The army does such acts for monetary benefit. They want to kill the civilians and pass them [off] as militants because they get huge monetary rewards for killing a militant in Kashmir,“.

He also added “Even if militancy ends here in Kashmir, the Indian army won’t stop killing people because they want to benefit from it. They don’t want to demoralize the soldiers who are controlling the situation for them on the ground.”

Why is this important for SSB?

During the interview, the recent news is always asked by the candidate and judged by the interviewer. As Kashmir issues is an emerging topic, not much detail is required to be read by the SSB Aspirants. The summary of the killing of Kashmiri student is only required.