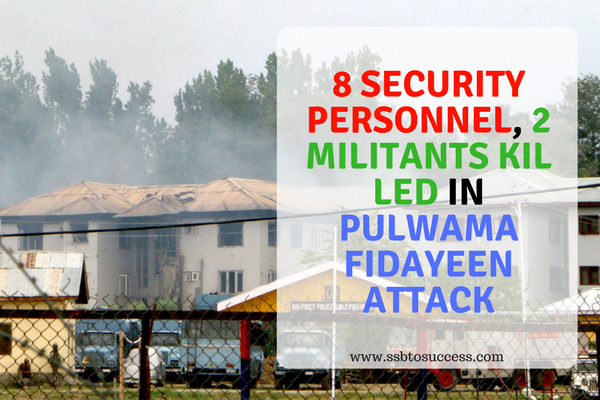 In a recent terrorist attack, 8 security person has died in a suicide (fidayeen) attack by the terrorists in a police station in Pulwama in the south Kashmir area. About hundreds of the police and CRPF personals where there along with the families of the police personals, who were safely evacuated from the site. As per the sources, the Pulwama attack claimed lives of 8 soldiers, out of which 4 were from CRPF, 1 was head constable of Jammu and Kashmir police and 3 were from Special Police Officers working for J and K.

The actual act of the scenario was the terrorist stormed into the district police lines in Pulwama, where dozens of the families were receding. The operation called for the immediate response from the army, which took action to overcome the disturbed situation. The operation to eliminate all of them has been successfully conducted and bodies of all 3 has been recovered. With respect to the counter action, the Para forces have been deployed for the operation and mobile internet services have been suspended to avoid any further public outrage. Jaish-e-Mohammad (JeM) has taken the responsibility of this fidayeen attack.
Out of the 4 CRPF persons who lost their lives in the attack, the names of two are Constable Jaswant Singh of Haryana and head constable Dhanawade Ravindra Baban of Maharashtra. J&K Police chief S P Vaid confirmed about no security lapse in this attack. “You cannot prevent (an attack) if somebody is ready to die” he added.

There have been several such incidents when the terrorists have attacked the army cantonments, soldier’s camps convoys etc. in Fidayeen attack where several brave soldiers have lost their lives. The support of civilians to the militants has been a key issue for these attacks.

Why this is important for SSB?

The ongoing truce between the militants and security forces in Jammu and Kashmir is a prominent issue these days. Starting from the civilian agitation, flagging of ISIS symbols, civilian conflict with armed forces and several such incidents have stuck the valley. With the SSB perspective, it is very crucial due to the unbalanced situation between the armed forces is a key point in the current affairs and has become part of the GD as well as the interview questions in the SSB. The aspirants must keep an overall knowledge of these issues to speak out strong points in the SSB.