Defence Preparedness – How prepared are we?

by Victor 0 comment
Being the centroid of the small nations, and a military hunk in the South Asia, India is working hard to enhance and raise its Defence preparedness in order to deter any kind of conflict with any of the neighbours, prominently with China or Pakistan. The defence preparedness becomes a topic of discussion in SSB. Below are some of the points to remember related to the defence preparedness of India.
Problems Ahead
–          –China’s Growing Interruption – The growing interruption of China in several international affairs is a problem for India. South China Sea, passage of connecting roads through Baluchistan, Masood Azhar issue, demarcation of LAC, etc. are some of the issues where China was found playing in the midstream. Recently, some media sources have alleged that China will pass a law by 2020 barring the military ships from sailing into South China Sea.
–         – Weak political scene in neighbouring nations – the political environment in the small nation around India is weak which makes India the total responsible element for the nation and India has the responsibility to maintain their interest. But some nation were seen a bit inclined toward other nations. Like in 2016, Myanmar and Nepal were seen inclined toward china, which makes the regional support a crucial point for India and raises the requirement of defence preparedness.
–          –Lack Of Weapons And Efficient Technology – The technology possesses by India is not sufficient to deter other super powers and even the dire neighbours of India. Old weapons and warheads in the Indian Air Force and lately updated technology by Indian army has been the most common problem faced by the Indian Armed Forces.
–          –Dearth of 27,000 officers – The deficiency of weapons is being seen along with the lack of the officers in the Armed Forces. The Armed Forces in going through the lack of the officer to lead the soldiers with is also a burden on the sides of the lack of the effacing warheads. 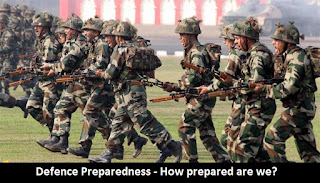 How To Overcome The Situation
–          –Making A Central Body For The Intelligence Agencies Like The US And UK – The intelligence agencies of India i.e. RAW for intelligence activities outside India, Intelligence Bureau to track down the intelligence activities inside India and Defence Intelligence Agency, a military operated intelligence agency need to be taken under a single authority as done by the US and other developed nations.
–       –   Emphasizing On Indigenous Manufacturing – The indigenous manufacturing is taking thrust, but at a slow pace.  The major part of the weapons manufactured indigenously is imported and assembled in India. China has reduced its foreign procurement and shown a hike in the indigenous production to make itself self-reliant which India must follow.
–       –  Infrastructure Enhancement At Key Sites – The key sites, like the border linings, are to be connected with the proper usable roads and other transportation means. China has constructed the roads on the Tibet border and near the Nathula pass under One Belt One Road project to keep the connectivity live at the critical points. Border Road Organisation of India has to be boosted to give out similar outcomes.
–         – More Enhancement In Technology And Cyber Boldness – The cyber war is taking a grand leap in this hi-tech world and some nations are using the virtual means to attack and steal sensitive data to counter the preparedness of other nations. India needs to work over it and several such incidents have been faced like hacking of official websites of the Indian government, Scorpene data leaks etc. so India should ponder over its cyber security and wall it with enhanced technical premises.
Conclusion – The defence preparedness is being maintained by India by inducting new arms and weapons either by the FDI or attracting the foreign firms to manufacture arms and weapons in India in partnership with Indian firms. The Armed Forces are also emphasizing on indigenous manufacturing and raising the arms and weapons by itself. The above points clarify the total face of issues related to the defence preparedness of the India and regarding solutions. The candidates must go through them and get the gist of it to give out good points in SSB.
0 comment
0
FacebookTwitterPinterestEmail