In 1999 Kargil war, Captain Vijayant Thapar VrC was one of the brave Officer of Indian Army who sacrificed his life to save the motherland and compel Pakistani intruders to move back to their territory. Since his childhood, he was highly passionate to join Indian Defence Forces and serve the motherland. His contribution in Operation Vijay during Kargil war will be always remembered. Read about his life that will motivate you to join the Indian Army.

Vijayant was born on 26 December 1976 to a family with a military background. The great-grandfather, grandfather, and his father all had served the Indian Military. Even his father Colonel V.N. Thapar was serving in Indian Army at the time Vijayant was born as well as he died. This army background cleared the goal of Vijayant Thapar to join Indian Defence Forces and serve the country.

During his childhood, he used to march in his home wearing his father’s military cap and his gun.

Vijayant Thapar joined Indian Army through CDS. He undergoes his training at Indian Military Academy, Dehradun. His outstanding skills in academics, as well as sports, bring him in limelight. During his IMA training, Vijayant faced a shoulder injury while participating in the boxing tournament. But even after having such injury, he won Gold Medal in water polo. In academics, he stood Second in the order of Merit for which he was awarded, Silver Medal.

On 12th December 1998, Captain Vijayant Thapar was commissioned from IMA and joined 2nd Rajputana Rifles. He was given Gwalior as his first posting. But due to some counter-terrorism operations, just after 1 month of his service, his entire unit was moved to Kupwara sector. Captain Vijayant Thapar witnessed two fierce encounters in Kupwara which he described to his mother.

But soon, the battle of Kargil happened and his unit was again moved to Drass sector to recapture Tololing, Tiger Hill, and its adjoining heights.

Once 2nd Rajputana Rifles was deployed at Drass sector, they were given the task to recapture Tololing, Knoll and Three Pimples. In the initial battle with Pakistani intruders, Vijayant was successful in capturing Barbad Bunker Pt. 4590 that gives the opportunity to wave Indian Flag on Tololing.

Tololing was the first victory of the Indian Army on 13th of June 1999. Now, the next task was to re-capture Three Pimples, Knoll and Lone Hill area. Captain Vijayant Thapar was the first to lead his platoon who made his start during the night with no cover back up. As soon as Pakistani intruders noticed their presence, Captain Vijayant faced heavy artillery shelling. But Captain Vijayant showed his leadership and capture Knoll with the loss of some of his men.

At the time when Captain Thapar captured Knoll, he has lost his Company Commander Major P Acharya. This increased his anger and hence he along with his colleague Naik tilak Singh started firing on Pakistani bunkers. For about half an hour, the exchange of fire continues.

But now, Vijayant decided to end the game and kill the enemies. He moved forward and started firing on the enemies. At the time he has reached almost near to them with a bare distance of 15 mts from the Pakistani intruders. Unfortunately, he was attacked with two enemy machine guns and one of the bullets hit him directly on his head. With this, he fell in the arms of Naik Tilak Singh and took his last breath. On 28th of June 1999, Captain Vijayant Thapar was martyred.

For the bravery and extreme sacrifice of Captain Vijayant Thapar during Operation Vijay, he was posthumously honored with Vir Chakra 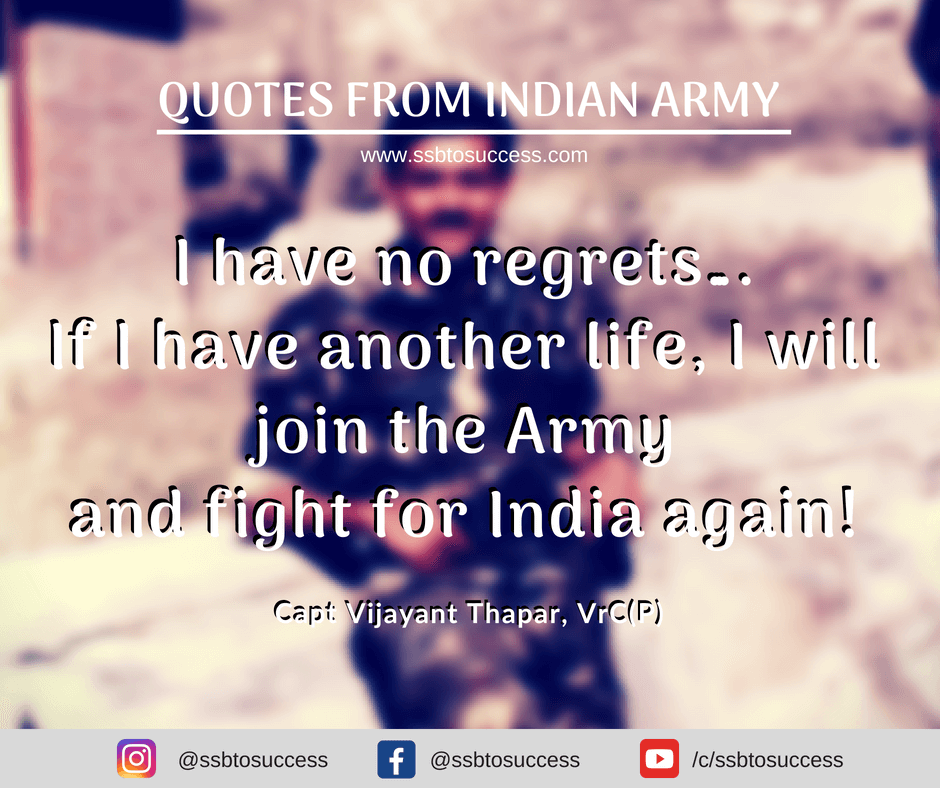 Victorhttp://www.ssbtosuccess.com
I am a Defence Freak who love to write for those who want to SERVE THE COUNTRY with PRIDE. I am currently preparing for Civil Services alongside writing on this website. All I want to say is... HOW'S THE JOSH?
Previous articleSqn Ldr Meet Kumar- An Inspiration for All Air Force Aspirants
Next articleJoin Indian Navy Executive and Technical Branch June 2019 Course