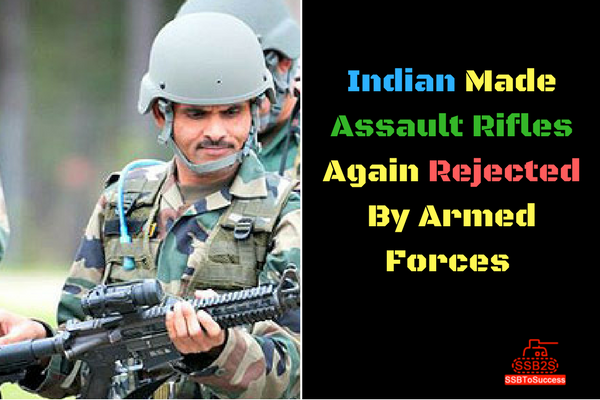 In another bit to replace the INSAS rifles, the Indian government has avoided compromising with the quality and refuse to take the indigenously made assault rifle second time in a row. The need of a replacement of the assault rifle is being seen from a long time. The base of rejection of the indigenously made gun were the problems in firepower and poor quality. The gun was built by the Gun Factory, Isabore, West Bengal and has a caliber of 7.62 X 51mm. Last year, another indigenously made gun called as Excalibur was rejected by the Indian army citing the non-fulfilment of the requirements of the Indian Army standards. The rifle has the issues of excessive recoil, sound signatures, and excessive flash. Along with that, the gun has many faults and stoppages up to 20, which the maximum limit and makes it a false choice. The authorities have called for the contracts from the firms for a replacement of the assault rifle and have got 20 proposals from different firms.

Currently, India is using INSAS assault rifles, which have been made over AK-47 pattern. The rifle has certain issues like soldiers have reported about the cracking of magazine during Kargil war. The rifle has also been exported to many small nations like an omen, Nepal etc. But as the modernisation drive is going on in the Armed Forces, the basic weapon for the foot soldiers need to be enhanced to empower them with a stronger weapon. As an alternate, Indian armed forces are also considering foreign arms in order to make the replacement of the INSAS and AK- 47 rifles soon, on which Indian armed forces are heavily depended.

The modernization of army is taking a leap as the Indian government has planned to spend $250 billion in next 10 years to modernize the armed force. The plan has attracted several foreign firms to cooperate in weapon manufacturing and also many arms manufacturing hunks like Lockheed Martin have decided to open a manufacturing unit in India. But the modernisation, which supports the ‘Make in India’ has somewhere compromised with the quality. The indigenously built aircraft Tejas was previously rejected by the Indian Navy due to not fulfilling the requirements. Similarly, a lot of shortcomings have been reported in Arjun tank.

The armed forces badly need a new advanced weapon to replace the old weapons, which have now become a hurdle in the working style of the armed forces. The forces are emphasizing to get a replacement as soon as possible. The major cause of Indian government heading toward the foreign firms for its need is the delayed delivery of the contracts by Indian firms and the lack of the quality that is required by the armed forces. The recent procurement proposals of M-777 Ultralight Howitzer Guns from the US, Rafale aircraft from France and S-400 Air Defence Systems from Russia are fresh examples of India’s preference to the foreign firms. Meanwhile, the Indian dream of Make in India is taking a leap in other sectors, but the indigenous production in defense need more thrust to meet the required pace and quality.