All about TATA Safari Storme that Replaced Maruti Suzuki Gypsy

Indian Army is always attended to receive the latest and ongoing military updates. And in that phase, the TATA Safari Storme has finally been delivered to the Indian Defence Forces. At present TATA automobile giant is completing the delivery order of 3192 units, which was earlier made by the Defence authorities. With this new beast in the Indian Army, the era of Maruti Suzuki Gypsy is over. The entire line of Gypsy will be replaced by TATA Safari Storme 4×4 model.

Indian Defence was all set to stop the purchase of Suzuki Gypsy further. They made a decision in 2017 when they approached TATA to fulfil their requirements for 3192 units of Safari Strome. Since then, the TATA was totally immersed in the development of Defense specific Safari Strome.

In the initial duration of the tie-up, the Army’s GS800 (General Service 8000) was sanctioned by the authority and hence was planned to deliver soon.

There are numerous reasons that transferred the biggest defense deal to Tata. The Maruti Suzuki Gypsy was having the biggest flaw of lack of air conditioning system that builds a suffocating environment for the car driver. Apart from that, the Gypsy was unable for more than 4 soldiers. And once all 4 soldiers are in, there is not much space to move ahead with the ample amount of ammunition and other necessary accessories. 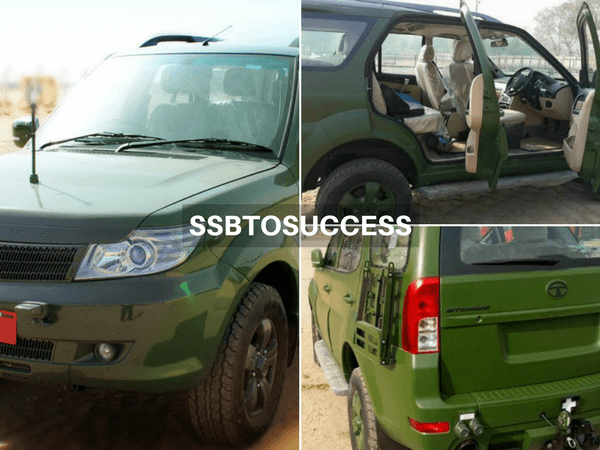 Safari Strome 4×4 is a huge beast which can allow nearly 6 soldiers with bags of ammunition and personal baggage. So, to build a military-fit vehicle, the Gypsy was finally replaced with TATA Safari Storme 4×4.

As per the information provided, there are nearly 35000 Maruti Gypsy that is pending for replacement in the coming years.

What Makes TATA Safari Storme to Dominate over the two?

The TATA Safari Storme is built with a hardcore military touch. The vehicle is provided with a minimum payload of 800 Kg with Air conditioning. As per the mechanical changes are concerned, not many changes have been offered to this car.

The army is provided with a six-speed manual transmission, four-wheel drive system. The entire SUV is offered a matte green colour to match the theme of Indian Army. Not a pinch on the SUV has been given a distinct colour. On its back fender, a Jerry can mount is provided. Along with that, a bonnet-mounted antenna is also installed where the flag will be installed as per the Officer whom this SUV will be assigned. A special blacked-out lamp is installed at the front as well as the rear of the SUV. With the single sight of this SUV, you can easily understand that the car has been manufactured to be prepared for wartime situations.

Coming to its engine, the TATA Safari Storme encompass a 2.2-litre Varicor turbocharged diesel engine. The engine is capable to churn out the maximum power of 154 BHP with a maximum torque of 400Nm. The 4×4 mode can be easily enabled in the SUV through a rotary knob, available at the center console of the vehicle.

In terms of interior, not many updates have been offered as compared to the standard models of Safari Strome. The dashboard is made available in standard carbon black colour that boosts the appeal of this beast. A wide handle brings a bolder look to the interior. Two map lights, one for front and one for rear has been offered in Strome 4×4. The presence of air condition will totally change the lifestyle of armed force personnel and make it more comfortable.

Tata Motor’s official website has revealed a few details about the upcoming vehicle. It gets STANAG 4569 Level-1 protection on the sides and rear. It is one of the highest rated protection according to the NATO standards. The Level-1 protection that the vehicle gets can save the occupants from artillery, grenade and mine blasts. It absorbs the kinetic energy to keep the occupants safe. The vehicle gets powered by a 3.3-litre liquid-cooled, direct-injection diesel engine. The common rail turbo-diesel engine produces a maximum of 185 Bhp at 3,200 rpm and a peak torque of 450 Nm at 2,400 rpm.

Victorhttp://www.ssbtosuccess.com
I am a Defence Freak who love to write for those who want to SERVE THE COUNTRY with PRIDE. I am currently preparing for Civil Services alongside writing on this website. All I want to say is... HOW'S THE JOSH?
Previous articleInspiring Story of Havildar Om Prakash Mitharwal Who Bagged 2 CWG Medals
Next articleAFCAT 1 2018 Result Out at afcat.cdac.in – Select Your SSB Interview Dates